Quick. Answer on your gut. Where’s the best place for your money today, stocks or gold?

OK, so perhaps that’s an unfair question. I don’t expect you to answer important questions about your finances on a “gut feeling” – although, as I’ll show you later this week, you can predict and anticipate many market moves through understanding pure human instinct.

Really what I want to show you is how understanding the relationship between stocks and gold can help you get into big bull markets (and avoid bear markets) for both assets. That’s what Eoin Treacy is going to explain to you today.

By the way, this is all a part of making every issue of Capital & Conflict more useful and actionable for you.

The main criticism I receive is that our daily letters are all “doom and gloom”. I happen to think that’s unfair. But it’s something I’m going to go out of my way to rectify. As well as alerting you to potential threats to your money – and there are plenty – I want to present you with valuable insights you can use to grow your money and solve problems, too.

Today’s piece is the start of that. Plus if you’re an income seeker, and your plans have been clobbered by low interest rates, look out for my notes later in the week. I think I have the answer!

For now, I’ll hand you over to Eoin…

PS There’s one big, actionable opportunity you should consider right now. It’s something that could help you make repeated gains of 1,000% or more. Don’t believe me? Well, get more information on that here and then make up your mind.

The Dow/gold ratio is one of the most storied ratios in finance, not least because it is made up of two of the instruments with the longest back histories.

I’ll tell you what I think this means in a second. First, let’s look at the history. When the chart is rising, stocks are rising relative to gold, and vice versa: 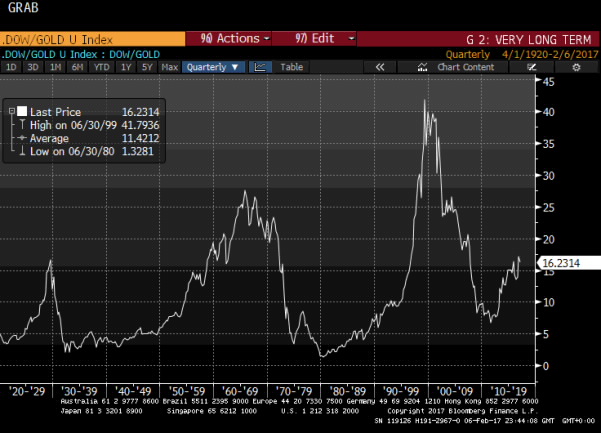 There are three major peaks and two confirmed major lows.

History doesn’t repeat itself, but it often rhymes. Therefore if we take an average of 35 years and 58% then the near peak will occur in 2034 at 66.

Now let’s look at the declines. The decline between 1929 and 1933 occurred very swiftly because the price of gold was static due to the gold standard, and stocks crashed. Subsequently stocks outperformed but only very modestly until about 1942 when a clear uptrend began to take shape. Therefore we could conclude it took 13 years between the 1929 peak and when stocks displayed a convincing pattern of outperformance.

It took 15 years for the ratio to move from the 1965 to the 1980 trough, with the most aggressive portion of the decline occurring after President Nixon quit the gold standard in 1971.

I would argue that since the decline was relatively similar in duration to previous periods of underperformance by stocks, that the balance of probabilities rests with the argument that the 2011 low is a long-term low for the ratio.

Let’s look at the individual constituents of the ratio.

There is a major disparity between comparing the performance of a stockmarket index with a commodity. The members of an index change while gold is immutable. That generally means when broad stockmarket indices experience secular bear markets they tend to range, which allows leadership to change and confidence to be rebuilt. 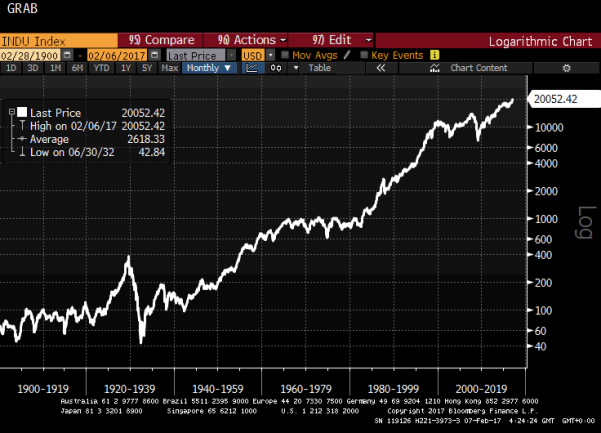 That’s exactly what we see in the Dow Jones Industrial Average. It experienced a lengthy range in the 1930s, another lengthy range between 1965 and 1982, and another between 1999 and 2011. These ranges coincided with major uptrends in the gold price. 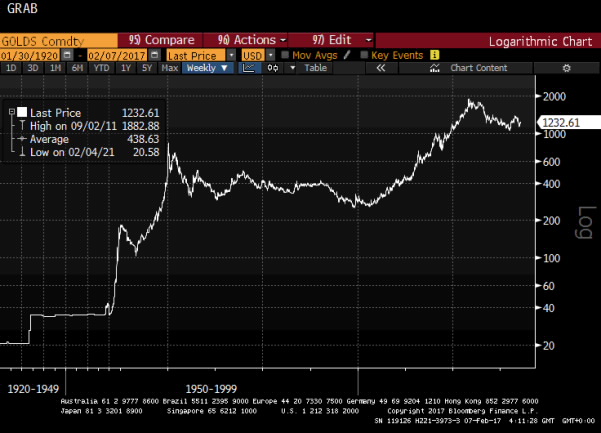 Gold is also capable of spending decades ranging in between these periods of extreme outperformance.

This chart from 1900 gives us three examples of gold spending lengthy periods ranging. If history rhymes, it could spend another lengthy period ranging between $1,000 and $2,000.

With gold prices today in the region of $1,200 that leaves ample room for an additional rally towards the 2011 peak at some point.

Meanwhile, the balance of probabilities rests with the Dow outperforming for nearly another 20 years.

Here’s the hard part. Let’s make some guesses, and since we are talking about 20-year timeframes these can only possibly be guesses.

Charles Kadlec’s book Dow 100,000, published in 1999, represented the epitome of cheerleading, considering how much the index fell in the subsequent bear market. Nevertheless, it is not only possible that level will be reached but likely if historical precedent follows through.

Believe me, I know these sound like ridiculous numbers, but consider this: the purchasing power of the dollar has collapsed over the last century and there is no reason to believe the process is about to reverse. In fact, if central bankers and governments get their way, it will accelerate. After all, there is a great deal of debt outstanding and inflation is the traditional solution to such problems. 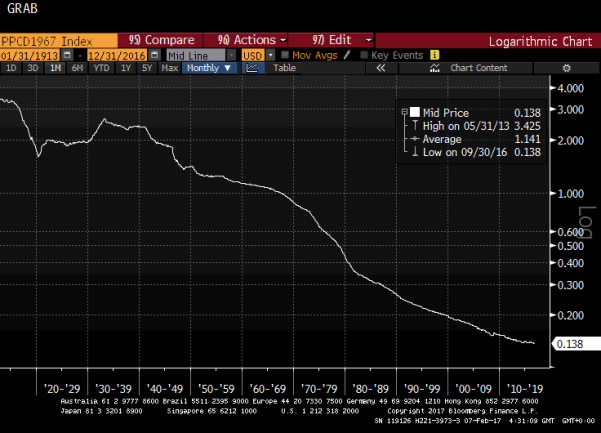 Perhaps the greatest message of the Dow/gold ratio is that both stocks and gold are effective hedges against inflation, though seldom at the same time.

Just so you don’t think that this is a purely US phenomenon, I created this chart of the FTSE All-Share divided by gold redenominated to pounds. 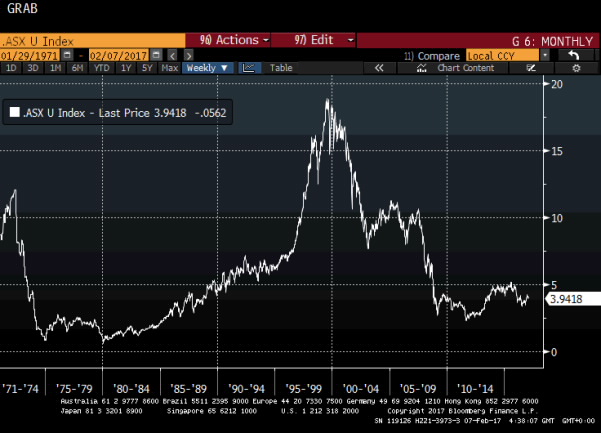 The FTSE All-Share is the equity index with the longest back history in the UK so we can create 46 years of back history for the ratio. We see two peaks and two major declines, but this time the ratio tends to spend a lengthy period ranging following the declines before giving way to a new bull market.

Right now both the FTSE All-Share and the pound price of gold are both pretty steady, but again the long-term outlook is for stocks to outperform considering gold has already had a major bull market in the last decade.