I bought some gold in my trading account yesterday. I’ll tell you the three reasons that persuaded me to go in.  Then you can tell me whether you think I’ve made the right call or not…

Reason to buy gold No.1: I like the chart

Some of you pay heed to charts. Some think it’s hocus pocus. Each to their own. I like them.

There a couple of things I like about the gold chart.

First, gold seems to have found a temporary low. The sell-off has been violent, but things have stabilised around $1,250 an ounce. There hasn’t been much of a bounce, but nor have the sellers followed through and taken gold lower, when the chart looked vulnerable. The $1,240-$1,250 area seems to be one where gold finds support.

But here’s the clincher – the relative strength index (RSI). Below is a chart showing the price of gold over the last three years, with the RSI underneath. You don’t need to understand what RSI is – I’m not even sure I do. All you need to note is that every time the RSI has fallen below 30, it has provided a tradable low.

I’ve circled each occasion in red. 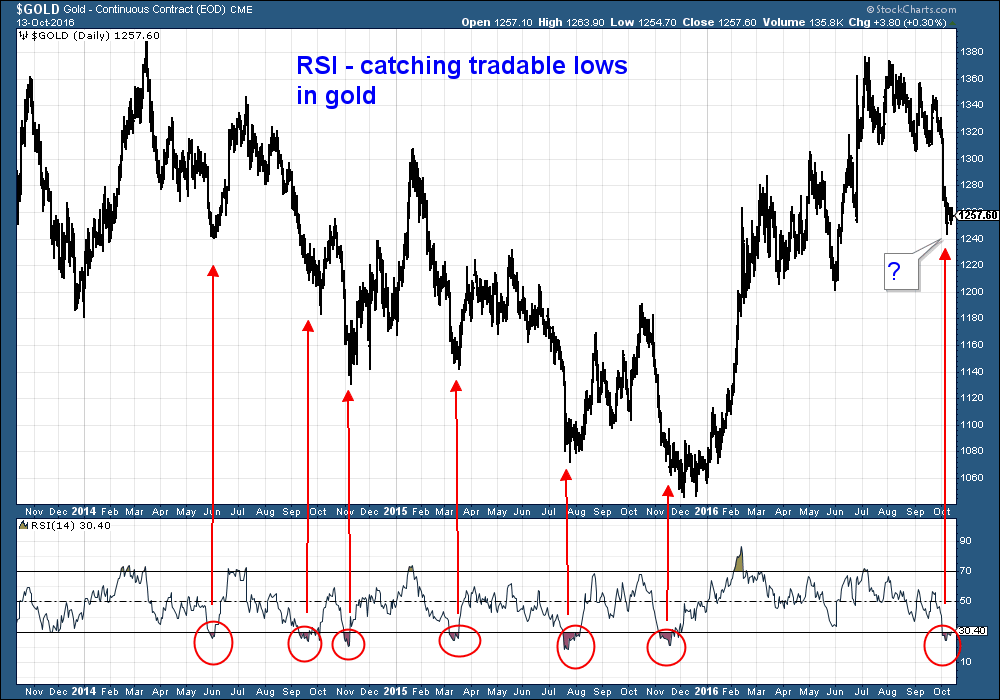 The RSI has just gone below 30 once again. Is this a tradable low? I’m speculating that it is. But, in case I’m wrong, I’ll use a stop, currently just below $1,240.

The chart above only shows the last three years, but you can go back much further. When it comes to spotting intermediate-term lows, RSI below 30 is a reliable indicator.

I stress: I regard this as a tradable low with a one-to-four-month timeframe. It is not necessarily the mother of all buying opportunities.

There are other technical indicators, which are also looking promising. I’m particularly keen on the moving average convergence/divergence (MACD) readings, though I don’t have final confirmation on them yet. I’m not including them here in the name of simplicity.

And, by the way, this is the dollar price of gold I am trading. Sterling’s demise these last few months has made me mightily appreciate the importance of gold in a portfolio, but I am less excited about gold’s short-term prospects in sterling terms (I suppose that means I am more bullish on sterling than I am on the US dollar). Happy to be proved wrong on that though.

Reason to buy gold No.2: interest has dried up

Mining requires a lot of capital. At the speculative end of the market, most mines do not make money. They burn through it.

Companies that are exploring for something do not make money, unless they find something. But they spend it exploring.

Companies that are developing a discovery do not make money. They spend it.

Companies that are building a mine don’t make money, though they sure do spend it.

And even companies that are actually operating producing mines do not always make money.

When metals markets are strong, everybody wants a mining company or 22 in their portfolio. Producers are profitable. Potential mines have value. Deals are everywhere. Share prices rise.

When markets are weak, nobody wants to know and the deals dry up.

But when the deals dry up, that’s a buy signal. From late 2015 to early 2016 there was nothing going on. Nada. What a buy signal that was.

By the spring, deals were everywhere. Your Aunt Mabel could have raised money last June for that gold mining prospect she has in her back garden, just to the right of the compost bin.

Now deals are few and far between again. It’s nothing like as dried up as it was at the end of 2015, but the frenzy of the spring has abated.

It’s not just mining deals though. This is just one symptom of a general lack of interest in gold at the moment. Trading volumes are down. Open interest in the futures exchanges has gone down. There is a distinct apathy on social media. Even the number of Google searches which include the word “gold” are down.

I take that as a positive.

Reason to buy gold No.3: the time of year

Seasonal patterns are, generally, only a secondary factor for me. But within that, every year, almost like clockwork, we seem to get a big shake-out in September and October. That shake-out often provides a tradeable low.

Below, via chart wrangler Nick Laird, is the seasonal chart. It shows what gold typically does each year, based on the month. You see the October sell-off you typically get? Have we just had it? If so, November is rocky and then the running is pretty good. 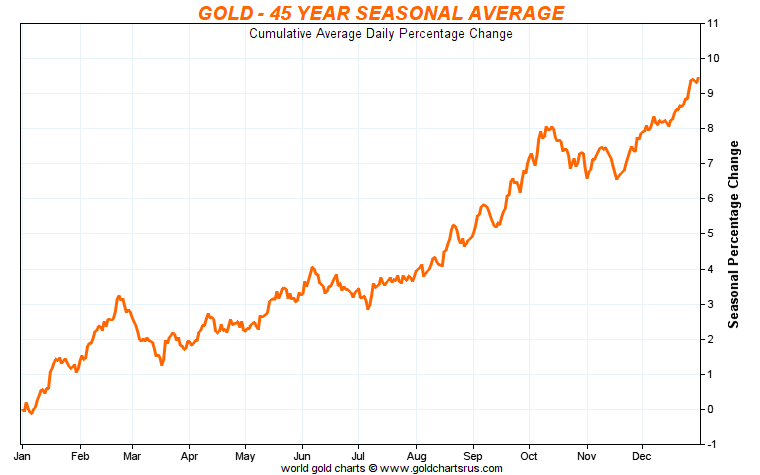 In short, this looks like a decent buying opportunity to me. It’s not one to bet the house on but if you’re looking for a chance to top up your gold holdings ahead of (hopefully) the next leg up, then I think the market is giving us a good chance to do so right now.