Well now. It seems my letter yesterday about how rich retirees feel has really struck a chord.

The consensus? The figures may say retirees today are richer than those in work. But it doesn’t feel like it! That’s because there’s a vast gulf between what most people expected to get in retirement and what they’re actually getting. I’ll share a few of your stories in a second.

Dare I say it, this is perhaps a case of 2016’s bastard offspring, the concept of “fake news”.

I mean this in a fairly narrow, economic sense. Sometimes there’s a gulf between what economic data tells us and what we experience. The claim that retirees today are richer than workers is one such case – it jars with the reality of people’s lives.

That doesn’t mean the original research is “fake”

But it may have been manipulated in such a way as to tell a particular story. Facts are stubborn but statistics are pliable, to quote Mark Twain.

In a sense there are two realities – when it comes to our interpretation of economic data anyway: reported reality and experienced reality. If the two jar enough, people begin to distrust what they’re being told. If GDP grows by 4% but people don’t feel any better off… over time they’ll lose interest in the figure altogether. Calling it “fake” is just the nail in the coffin.

Perhaps we’re measuring the wrong things. Our economic reporting is quantitative, not qualitative. Are retirees really richer than they were a decade ago? You can argue that both ways. Are they qualitatively any better off? You tell me – nick@southbankresearch.com.

It’s certainly true that the last decade has seen a major shift in how we approach retirement – and how we go about generating income.

I’ve just been putting the finishing touches to a new research report (available tomorrow so look out) called “The 30-Day Income Challenge”. It focuses entirely on helping you generate a large income from “non-traditional” sources (all the traditional ones pay a fraction of what you’d need).

As part of our fact-checking process, I spent some time looking at the collapse in income from annuities, gilts and savings accounts. None of it was new to me.

But still, the numbers are shocking!

For instance, the payout you could expect from a regular annuity has collapsed by 31% over the last decade. That’s a third of your income gone. Not nice. Especially if you’re about to retire. Watching those numbers fall can make you sick to your stomach.

Why have they fallen? In short, quantitative easing (QE). Money printing. Manipulation of the system by those in power. QE involves creating money and buying UK government bonds (gilts). That pushes the price up and the yield down. Gilt yields are a huge component in annuity payouts. So a chart like this really tells the story of collapsing retirement income: 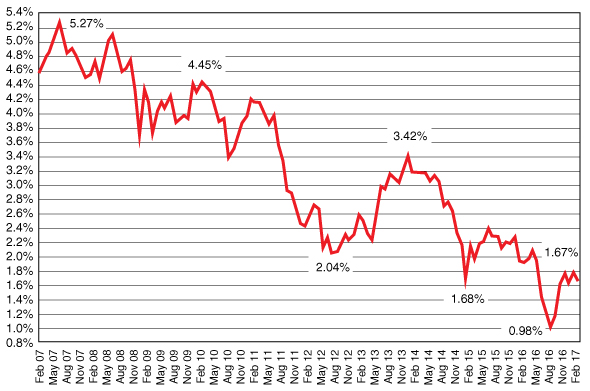 After yesterday’s piece, many people wrote in to tell me exactly how they felt. It wasn’t nice reading. But it confirmed what I thought. And it gave me extra impetus to try and offer you a solution – our “30-Day Income Challenge” coming tomorrow.

This note more or less summed the whole situation up:

I am fairly meticulous when it comes to planning and careful when it comes to risk. Needless to say falling interest rates and the delay to age 66 of the state pension have made a considerable dent in our anticipated income.

Had the government not interfered with the markets I would be substantially more invested in stocks earning perhaps 3-5% instead of more like 1.5%.

Does this affect my outlook in life, of course it does and will continue for the foreseeable future.

I am quite content for the younger generation to benefit from low interest rates given the level of house prices but surely there could be a half-way house with mortgages 1-2% more expensive and savers receiving the benefit – surely a more fair system. I have little faith in the accuracy of the newspaper article which I had already read as I suspect they do not live in the real world.

Successive Governments failed to tackle the coming retirement issues, driven by their need to be re-elected rather than do the right thing for the country.

I’m a pensioner and I can’t imagine how I’m better off. Interest rates have stagnated whilst inflation has not. My pension fund is nowhere near keeping up with inflation. I find it strange how all of the media blame Brexit for inflation rather than Mark Carney who continues to print money regardless, which must be having a greater effect in my opinion.

We may have an historic advantage that we were able to save when interest rates were outpacing inflation but that has rapidly eroded over recent years. I can even remember when we could afford holidays when we first retired but that’s a thing of the past.

Something must be done!

And we’ll do our best, with the resources available to us here at Southbank Investment Research, to help you solve this problem. More on that tomorrow. If you’re looking for a simple way to generate more investment income – do not miss tomorrow’s letter!

Germany to Greece: “Give us your gold!”

People who dismiss gold as an integral part of the global financial system tend to be incorrigible optimists. That makes sense. Most of the time, you don’t “need” gold.

But that position assumes that things never go wrong. When things go wrong people start to distrust a system of paper and promises, and seek out hard assets like gold. This is true at the very highest levels. Look at what’s happening between Greece and the rest of the eurozone right now.

Greece is trying to secure the next part of its bailout. It’s struggling. You’ve heard that before so you know the story. Enter Bavarian finance minister Markus Soeder, who suggested that more bailout cash should be pledged against “gold or real estate”.

Or to put it another way: give us your gold and we’ll bail you out.

The 25th Amendment is the Deep State’s new weapon

Ever heard of the 25th Amendment? Now’s the time to get up to speed about it!

According to some reports, this could be the method by which the Deep State attempts to remove Donald Trump. Specifically we’re talking about Article 4 of the 25th Amendment. This deals primarily with the succession of a new president if the current one is incapacitated (emphasis added):

In short, this is the process by which Trump’s own cabinet declares him unfit for office and replaces him. I doubt it’ll happen. But if it did happen, this is the mechanism. Look out for reports of the White House recruiting an on-site psychiatrist – the first step to presenting Trump as insane.

It may seem far fetched. But don’t count the Deep State out. Whatever you think of him, Trump is a massive disruption to the established way of doing things. People in power don’t like that. As unlikely as it may seem, there’s plenty of motive.