The only thing driving the stockmarket

The only thing driving the stockmarket

It turns out that investing is really very simple… in a way.

Ignoring the details for a moment, does this hold true? Pretty much, according to his chart: 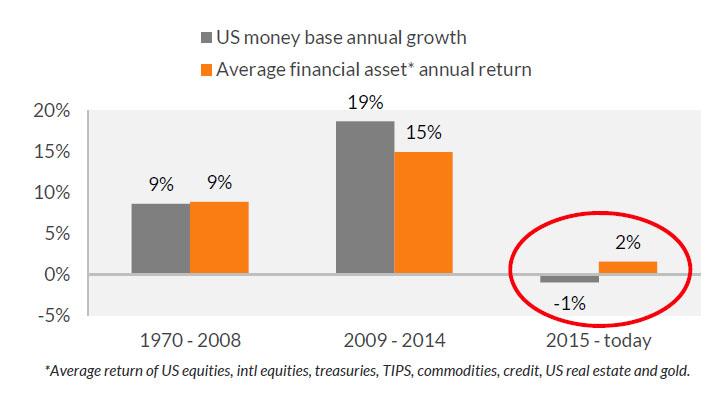 Let’s gradually make the example more complex to get closer and closer to reality.

Imagine there are two investments. Then the growth in investment prices can be uneven as money flows from one to the other. But their total growth from a doubling of the money supply still gets you 100% gains if you hold an evenly diversified portfolio.

Of course, the definition of what the money supply is becomes very complex. The government and its economic henchmen at the central bank only have control over the monetary base, not how much credit money is created by the banking system, nor the velocity of money.

But the point that Wang is making is clear: the money supply drives investment prices.

Is that good news or bad? Well, the US money supply is expected to shrink in coming years as the central bank winds down its quantitative easing (QE) efforts. Other central banks will follow in time. The net effect is that the monetary base of major economies is falling as of this year.

So the stockmarket will perform badly?

Perhaps. Don’t forget that credit and the velocity of money come into the equation.

And if the stockmarket is part of the modern central bank’s mandate, then it’s easy for the central banks to reverse their policies at any moment.

Any crash shouldn’t get out of hand.

There is one exception though. The European Central Bank is bound by a bundle of rules on its QE. Some of these are limits to the level of QE it can implement. That means, if the world consistently turns to monetary policy as a rescue mechanism, Europe could be the first to hit a wall.

The eurozone’s monetary system is downright bizarre thanks to the separation of nations, but the shared monetary policy and currency. The financial plumbing designed to make the euro work is leading to vast imbalances that nobody understood a few years ago, let alone when it was conceived.

What are the investment implications? Well, first of all, I’d steer clear of any European assets. Although perhaps investing in northern Europe could make sense.

I don’t know whether he’s advocating this style of investing or not, but Wang points out that a diversified set of investments leaves you in an intriguing position. Because the flows of funds between investments don’t affect you – for every loss, there’s a gain – then you’re left with exposure to the money supply. It’s like betting on the tide instead of the regatta.

The result is that your basket of assets follows money supply growth. Like this:

In end, knowing all this doesn’t leave you with an obvious solution. Predicting the money supply is difficult. Even if you believe central bankers’ forecasts about their own behaviour, banks and the velocity of money are the dominant considerations.

But if Wang is right, it does tell you what to watch.

Money can flow into and out of investment assets altogether

I don’t think Wang has it quite right though. There’s another factor which he hasn’t taken into account. It’s called the life cycle hypothesis.

The idea is that people buy investments during middle age. And then sell them in retirement.

And that allows you to predict investment prices.

But what does such an analysis suggest for the FTSE and our other investment markets? That’s what I’m working on at the new Zero Hour Alert.

Since our launch, the biggest prediction we made is playing out all over the news. I can’t even keep up. But you need to take a look now if you don’t want to miss the bus… or get run over by it.