Should you sell your stocks?

Should you sell your stocks?

This just in: UK consumer price inflation in July was 0.6% according to figures out this morning from the Office for National Statistics (ONS). Expectations were for 0.5%, according to Bloomberg. That prompted some breathless commentary on Twitter that a weaker pound was already leading to higher inflation via import prices (a weaker pound).

But that’s not what the ONS said. “The main contributors to the increase in the rate were rising prices for motor fuels, alcoholic beverages and accommodation services,” it reported. It somehow omitted that transport prices were up 1.6%. Booze was up 0.5%.

You can understand people wanting to have a drink in July. The weather was nice. And whether you were celebrating Brexit or mourning it, alcohol may have been involved. But here’s the point: the inflation figure was 0.5% in June and 0.5% in March – well before Brexit. For now, the data isn’t showing anything Brexit related.

And let me throw this out for your consideration on a Tuesday: maybe the new UK needs higher interest rates, not lower rates. Inflation hasn’t spiked yet. But if you want to disincentivise cash hoarding and fear: raise interest rates, make savings pay again, and quit acting like there’s an economic catastrophe at hand when there’s not.

The UK stockmarket has hit a “critical technical zone” while US markets continue to hit all-time highs overnight, according to this morning’s papers. Meanwhile, the Rothschild family’s listed investment fund is cutting its exposure to UK shares and has warned that the geopolitical landscape has “deteriorated”. And if you’re worried about your pension in a low interest rate world, spare a thought for the millennial generation who will probably never be able to retire.

Let me start with the simple question I’ve been asking you for a week: should you sell your stocks?

Answering that question in a measured, rational, evidence-based way is what last night’s TradeStops webinar was all about is. The simple fact is that the single biggest mistake investors make is selling low and buying high.

The webinar was well received. A transcript is being made as we speak. I’m also going to arrange to rebroadcast it if you couldn’t make last night’s presentation. It will probably be shown again on Thursday. Make a note in your diary. But now, about the FTSE 100 and whether you should sell your stocks.

Is the index “overbought”?

The FTSE 100 has risen for eight straight days. It closed yesterday at a 14-month high of 6,941. But the pound fell against the dollar yesterday. And with July inflation and June house price figures out today, the wind behind the index’s sails could falter. Technically speaking, it may already have.

The relative strength index (RSI) on the FTSE 100 is above 70, as you can see on the chart below. Technical analysts will tell you that an RSI over 70 suggests an index or security is “overbought”. An RSI under 30 suggests an index is “oversold”. The last time the RSI went over 70 on the FTSE 100 was in May of 2013 – right before the index fell 12%. 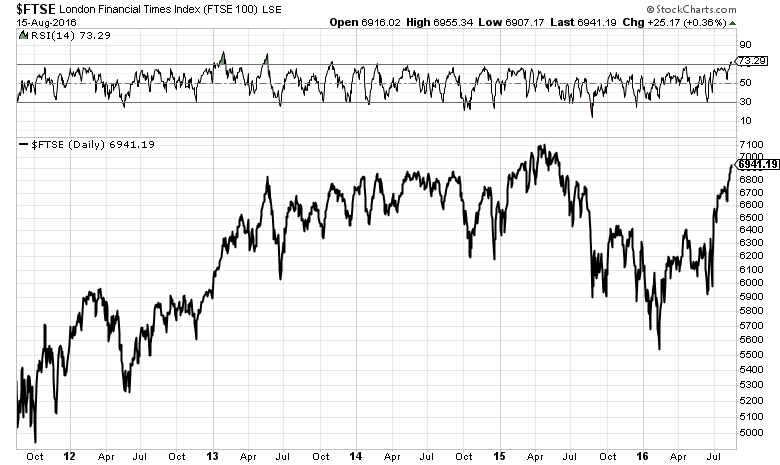 The index is within striking distance of its all-time high of 7,089 made in April 2015. Here I should apologise for making a howler of a mistake last week. I said in a video last Friday (Why it might be time to sell stocks) that the all-time high on the FTSE 100 was in December of 1999. My apologies for that. My only excuse is that I was semi-retired last April, chopping wood in the mountains of Colorado, and caring not a single whit about the level of stockmarkets or how quantitative easing (QE) distorts them.

But here we are today and the question is if the index is oversold, which components will lead it down? To figure that out you’d want to look at the individual stocks that make up the index and see where the RSI is on each one. Or, you would use TradeStops!

That’s what I’m encouraging active investors to do. It gives you a reading on the specific volatility of each stock you own. It also tells you about the overall level of volatility in your portfolio, and how your investments are allocated. To my knowledge, that level of analysis is not ordinarily available to self-directed investors via their own computer.

But Dr Smith’s “stock state indicator” also tells you whether a stock is in the green, yellow, or red zone. If it’s a stock you already own and you’re deciding whether to sell, or if it’s a stock you’re thinking of buying but aren’t sure, then TradeStops can help. When to sell, when to buy, how much to buy. Those are the three legs in the TradeStops risk management system.

Or you simply wait and see what happens. Sometimes doing nothing is the best course of action. It’s certainly the best course of action if you don’t have specific analysis to act on. The macroeconomic data out later this week may confirm what the technicals suggest: some of the stocks in the index are overbought. Some – the ones that benefit from a weaker pound – may be just fine.

If you’re running a family office with a multi-asset diversified portfolio, you may want to read page 39 of today’s Times. The Rothschild family’s listed investment fund is cutting its exposure to stocks from 55% to 44%. Lord Rothschild said that close to a tenth of his personal money and client’s money is now in gold and precious metals.

Sounds like Tim Price to me. Perhaps Lord Rothschild reads London Investment Alert! And what Lord Rothschild said in explaining the reallocation sounds even more like Tim.  He said that the UK’s low interest rates were “the greatest experiment in monetary policy in the history of the world”. He added:

We are therefore in uncharted waters and it is impossible to predict the unintended consequences of very low interest rates, with some 30 per cent of global government debt at negative yields, combined with quantitative easing on a massive scale… preservation of capital in real terms continues to be as important an objective as any.

I’d say that other than living a hardworking, honest, and ethical life that you can look back on with satisfaction on your deathbed, preservation of capital is the most important objective in a market like this. Secondary objectives would be generating some safe income from your investments. Finding a way to earn a capital gain not juiced by QE and low rates comes third on my list. Climbing Mount Everest, fourth.

David C Stevenson from Lifetime Wealth will be in the office shortly to talk about whether such a thing as a “safe” income investment exists anymore and where you can find a respectable yield. That got harder for millions of Santander customers yesterday. Why?

The bank cut the interest rate on its “123” account from 3% to 1.5%. The decision reduces the interest income of approximately 3.6 million customers. The banks said it expected interest rates to stay “lower for longer”, a view I know David has expressed as well.

David has written that low rates could last for years, not months. And that raises a grim thought for millennials already facing wage pressures from automation and globalisation. With the UK running a £1.3trn deficit on private pension funding, anyone under 35 faces three facts: you’ll have to fund your own retirement from savings, you’ll have to work longer than your parents, and you may never retire.

Pretty gruesome for the millennials. But it’s not much better for anyone who’s on the verge of retiring. Not that the Bank of England cares one jot for today’s pensioners and retirees. “The Bank of England clearly believes that the effect [of low interest rates] on our pension system is acceptable long-term collateral damage”, says David Blake from London’s Cass Business School.

He was speaking about younger workers. But he may as well have been speaking for anyone in Britain on a fixed income. Or anyone who saved for a lifetime with the intention of self-funding their retirement. Those savers and pensioners never expected that Britain’s financial authorities would deliberately set out to undermine their quality of life and their financial security… in order to purse a monetary experiment that benefits the banks and borrowers.

The Bank of England is bound to cite the economic data this week and warn that QE and low rates are warranted given Brexit-related risks. But it’s as if it’s begun to use Brexit as an excuse for everything. What it really wants is low rates for longer, cheap money for ever, a defined benefit public pension, and a wall between itself and the real world.