What does silver know that gold doesn’t?

What does silver know that gold doesn’t?

WINDERMERE, LAKE DISTRICT – You exit your tent on the sound of war trumpets. The encampment is awash with panic. The enemy have been spotted advancing over the horizon – and they’re swarming towards your position.

As commander of the fort, it’s your job to hold them off. You raise your voice and bellow for your lieutenants through the chaos. Two men answer your call.

You’ll need one to help you at the front line, and the other to organise support behind it. Manning the battlements will be a brutal, bloody job – whoever you bring with you will need courage and conviction in equal measure.

Of the two men, one is a gold investor. The other is a silver investor.

Which one do you pick?

Which do you trust will have your back when the fighting gets roughest?

A metallic dilemma to start the week…

Some readers may well be wondering exactly what I’m banging on about at this point. What inspired the above contrived scenario is this chart here: 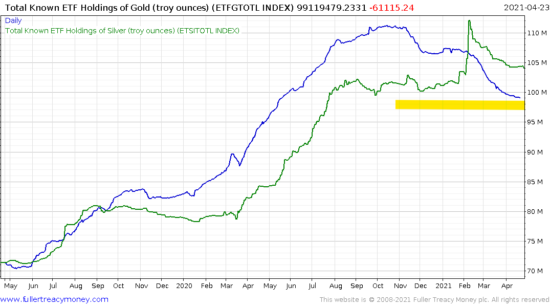 What you’re looking at there is a comparison of exchange-traded fund (ETF) holdings of gold (in blue) and silver (in green) over the past year.

As a result, the growth and contraction in these holdings shows us how interested investors are in each metal.

Note that we are not comparing the overall value or total size of these gold and silver hoards here. We’re just looking at their “direction of travel” – if they are increasing or decreasing in size.

Most of the time, these hoards have risen and fallen in tandem. It’s easy to imagine why this occurs – the price of both metals is correlated, and when investors are bullish on gold, some will buy silver to get some more leverage. 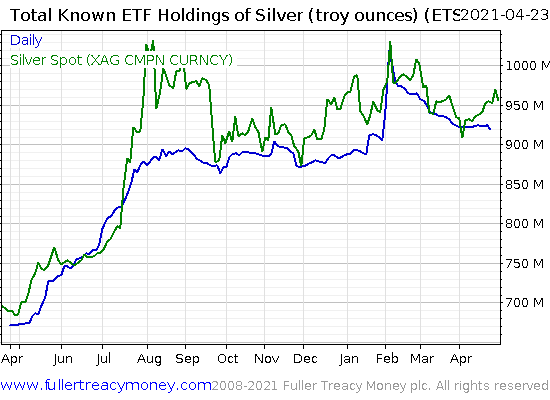 … and the interesting divergence that has now formed between gold and silver: 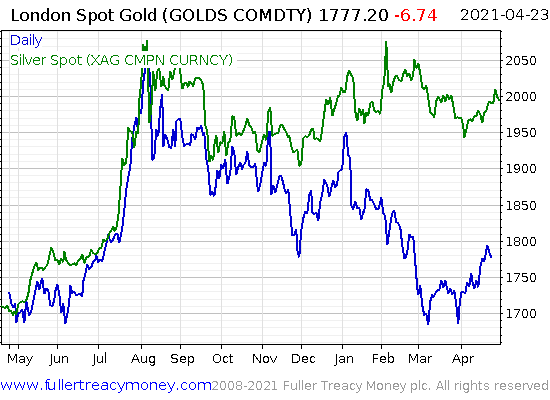 This break in correlation is intriguing. Silver is the more volatile of the two metals, and normally just does whatever gold does, “but more so”. But over the past several months while the gold price has been falling, silver investors have charged into the breach and pushed the price in the opposite direction.

Precious metals investors have no doubt been dismayed by the performance in gold since its peak in August, but the actions of silver investors are now “saving the day”.

How exactly this has all happened is a topic of debate – we commented on the actions of the “#SilverSqueeze” crowd back in February (see: Robinwho?) – where some vigilante investors were supposedly trying to increase the price of silver by buying silver bullion and shares in silver ETFs. As I commented back then, I remain unconvinced that this is actually what initially triggered the move, but at this point it doesn’t make much difference.

I said in January that silver was the asset to own this year. That call has since been somewhat overshadowed by the rise of bitcoin, but we’re not even halfway through 2021 yet – and my conviction hasn’t wavered. Perhaps the next leg up for silver will arrive when gold regains its lustre – which shan’t be long, I reckon…