ABERDEEN, SCOTLAND – A month ago, I told you how a buddy of mine was getting into bitcoin, and how I feared this might be a classic sign of a market top (What should Nixon have done in 1971? – 12 January).

After all, the last time this chap got excited about crypto had been during Christmas 2017, at the peak of the last bitcoin boom. And he got into gold last August, which has turned out to be an interim top in the gold market.

Is my old schoolmate a reliable contrarian indicator?

I said we’d have a clearer idea in a month’s time. And here we are… with the BTC price $10k higher!

Whatever happens next, “the schoolmate indicator” is clearly not perfect.

Which got me thinking more generally about the worrying signals cast by bitcoin’s tremendous price surge in recent months. The bulls have disregarded them. The bears point to them as signs of a mania, exasperated. Who is right? Are these signals worth paying attention to any more? The fact I’m even asking that question suggests that yes, we definitely should be looking at them…

Back in December, an American Football player called Russell Okung who plays for the Carolina Panthers started ditching dollars for bitcoin, converting half of his $13 million salary into BTC using an interesting new app called Strike.

This news item brings to mind the case of supermodel Gisele Bündchen denying the dollar in late 2007. Following a massive bull run in the euro through the 00’s, Bündchen began refusing dollars as payment for her modelling, accepting only euros for her photoshoots.

Following this news, the bull market in EUR would continue for a few more months into 2008 – but ultimately, Bündchen’s currency trade heralded the end of a trend which had lasted the better part of a decade: 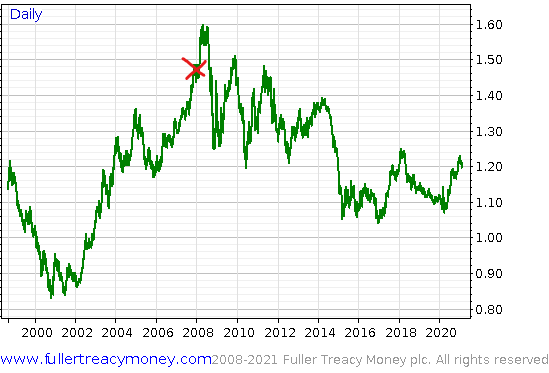 Not the best financial decision to have made. But having reverted back to accepting greenbacks, I imagine Gisele is doing just fine. In fact, she’s probably still celebrating the victory of her husband right now (an American football player, funnily enough) at the Superbowl earlier this week.

Meanwhile, Okung’s decision has been significantly profitable so far. But for how long? Bitcoin moves a lot faster than the euro of course – so the bears would say not long at all.

Since then, we’ve seen Elon Musk become a bitcoin evangelist, getting Tesla to buy a billion dollars of it and waxing lyrical about crypto on Twitter… 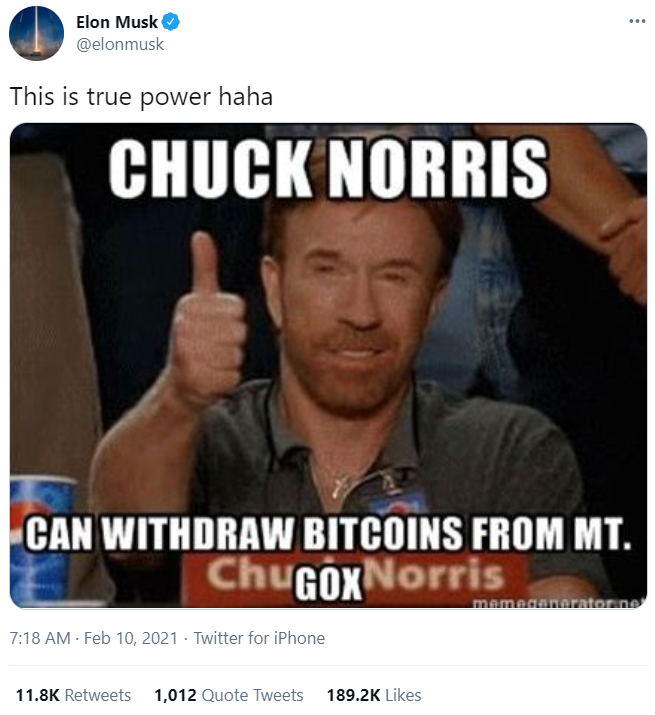 Soon to be joined by Lindsay Lohan no less…

And now political hopefuls are now getting in on the action:

All of these strike me as reason for caution – they all carry a glimmer of the shoeshine boy giving stock tips to a Wall Streeter near the end of the 1920s boom.

However… I’m not convinced these are the signals that the end is here.

The internet and social media are devaluing these market cues as it’s now so easy to tell everybody you’ve done something out of the ordinary, stupid, or both.

Early last year, millennial YouTubers were making instruction videos on how to buy ridiculously risky call options on Tesla, with helpful descriptions like (and no, I’m not joking):

If you don’t know what call options are, you should definitely consider buying Call options for Tesla in Robinhood [the American trading app]. You can make a lot of money if you time the market right and are lucky!

This is incredibly – I repeat, incredibly – irresponsible behaviour, which immediately suggests a market top…

… and yet here we are, a year later, and those options trades have probably paid off.

There was the brutal sell-off in March, but that was an external, Wu-Flu driven event that was shrugged off once central banks and governments ran in to save the day.

Risk taking has not been discouraged whatsoever – quite the opposite. And now even more extreme displays of obscenely risky trading behaviour is on show, from kids taking investment advice from TikTok videos, to hunting down short sellers for daring to doubt the market.

I’ve come to the conclusion that the internet is causing inflation in market-topping signals. And so now I can’t trust them so much. With the windscreen smeared and opaque, we’re going to have to fly using the instrument panel alone…