ABERDEEN, SCOTLAND – I’ve a chart I’d like to show you today. Just one this time – and it’s a corker. But before we get to it, I’d like to provide a little context.

In today’s letter I’d like to share my view on bitcoin going forward from here. We’ve dwelt on various aspects of BTC in recent notes, but I feel very aware that I haven’t compiled them together and wouldn’t want anybody to get the wrong impression from reading just one or two these letters.

To my eyes, bitcoin needs the bull market in tech stocks to remain intact for it to prosper. As illustrated in Performance so strong it breaks the chart (8 January), bitcoin has only made its greatest surges in recent years when the tech sector has already been booming for a while.

If the rally in tech stocks runs out of gas, I think bitcoin will lose its forward momentum and fall out of the sky. When looking at what might bring tech down, I think the arrival of higher-than-expected inflation would trip it up, which would in turn bring down BTC. But we’d need inflation to show up in the figures first, and I suspect that’ll only arrive once the world shrugs off the practice of lockdowns – which could be a while.

My view on this would be considered heresy by many bitcoiners, as BTC is often promoted as a form of protection against money printing by government, like gold. But while BTC may share some of gold’s properties (like its scarcity), I don’t believe it will suddenly switch from trading like tech with a turbocharger to an inflation hedge overnight. Maybe that’ll happen in the future, but I see an inflation shock catching BTC unawares and scaring it down first.

So tech running out of steam is the biggest risk which I see for the BTC price going forward. There is always the “Sword of Damocles” hanging over bitcoin in the form of outright government bans on crypto, where domestic crypto exchanges are shut down and offshore fiat exchanges are sanctioned, but like I said on Thursday (Romans 13 (trillion)), I believe future regulation will be accommodative rather than predatory.

Zooming in closer, I do not believe that stablecoins such as Tether are massive frauds printing digital money out of thin air to prop up the price of BTC and thus lure in investors (a subject explored in the The Night Trade – 6 January). However, the perception that this is the case by some market participants would be enough to cause a decline in the BTC price. This is something we took a look at in $pilt ₿lood, after an anonymous blog claiming bitcoin is a massive pump ‘n’ dump scheme being run by Tether went viral. (Interestingly, the BTC price has declined a little since then, though that may be more to do with the likes of Janet Yellen making noises about regulation and the incorrect rumour that somebody managed to defraud the bitcoin blockchain with a “double-spend” transaction.)

Of course, I could be wrong about Tether – maybe it is just one massive fraud, in which case the reveal that this is the case by a legal authority would cause BTC to crash. But as I say, I don’t believe this is the case.

I was happy to see the BTC price take a break from its breathless surge to $40k. Waking every morning to see another massive BTC rally had occurred overnight was akin to being rudely awoken by somebody funnelling cocaine into your nostrils – an exhilarating experience to be sure, but not one I asked for.

Following that pullback, we now find ourselves here, with the BTC price beginning to find a range, and everyone waiting with bated breath what it’ll do next.

Triumph of the HODLer

How low BTC will go in this range we have yet to discover, but I believe that once we break out of this range it will be to the upside. And that’s where we get to this chart. It comes from the good people of Glassnode, a crypto analysis firm, and it gives us an incredible insight into just how much BTC there actually is available for purchase on exchanges.

As all bitcoin transactions are published on its blockchain, it is possible to analyse if those on the receiving end of said transactions are likely to spend that BTC, or sit on it. For example: bitcoin wallets (think “bank accounts”) used by crypto exchanges are very active in receiving and sending BTC, while wallets controlled by bitcoin “whales” (early investors with very large holdings of BTC) transact far less frequently.

It’s not just the whales that sit on their BTC however – the practice is celebrated by bitcoiners everywhere (myself included). The “HODL” refrain commonly heard in the bitcoin community (a drunk misspelling of “hold”) and the act of “stacking sats” (meaning to frequently buy small denominations of bitcoin, known as “satoshis”) both speak to the common investment strategy of buying BTC on an exchange, sending it to a private wallet, and then doing absolutely nothing with it. This removes that BTC from supply, which puts upward pressure on the price and in turn makes new buyers more reliant on miners for BTC purchases.

As you can see, an awful lot of bitcoin has been sucked out of exchanges into the hands of those who have little intention of spending it anytime soon. I think this will create a serious supply squeeze if we keep getting bids for BTC in the market: 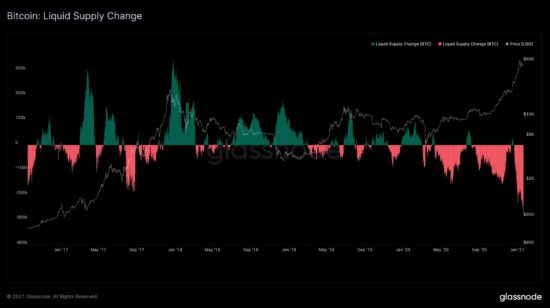 By Glassnode’s analysis, in the month leading up to 20 January some 270,000 BTC (£6.8 billion worth) was transferred from crypto exchanges and frequent BTC users to wallets with a history of not transacting often, if at all. This is a massive squeeze on BTC supply of a magnitude not seen since 2016, when the bitcoin world was so much smaller, and the price was well below £1k.

HODLing bitcoin has become popular. It’s no longer a trait of the grassroots bitcoin community, but I suspect of the larger players who have recently arrived in the space. And that’s why I think – despite the elevated price of BTC – that when it breaks out of this range, it could move explosively higher yet again. There may simply not be enough BTC on the exchanges to satisfy demand without the price rising significantly.

I could be wrong of course. But given this, and taking into from the risks I highlighted above, I remain cautiously optimistic about bitcoin.

That’s all for today – back tomorrow…

PS You can take a look at the live chart for yourself on Glassnode here.