Party at the frontier

Party at the frontier

ABERDEEN, SCOTLAND – We’ve had a fair bit of snowfall over the last few days. It’s nothing extreme – it’s not piling up high on the pavement – but it is damn chilly, and enough to remind everybody that we haven’t shrugged off the winter’s clutches just yet. When I was a kid, this would’ve been just enough snow to make me hopeful that school would be cancelled the next day, but not enough to actually make it happen.

While we’re still firmly in the grips of winter however, it appears we have entered another season in the market: the long awaited “alt-season” in the cryptocurrency space, when bitcoin takes a step back and altcoins (cryptos other than BTC) starting wowing the world with ridiculous triple-digit or even quadruple-digit gains.

There have been a few false dawns for the altcoin space recently, but I do believe alt season (“alt szn” to use the crypto parlance) is now upon us in earnest now that Ethereum has reached new all-time highs. Ethereum hit $1.3k during in January 2018 at the feverish peak of the last crypto bullrun – a level which has now firmly been breached: 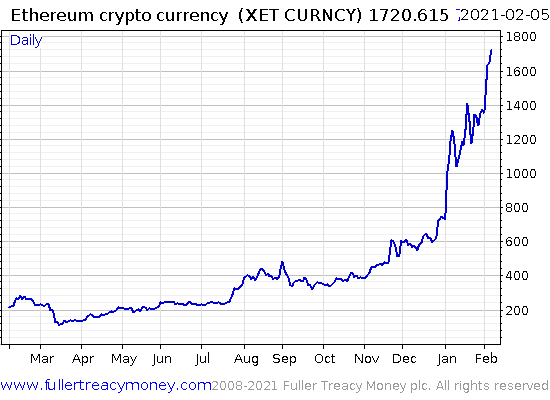 Ethereum is the largest altcoin out there by market cap, but it also forms a base for much of the broader altcoin ecosystem. While the Ethereum token (ETH) is thought of as a cryptocurrency, the ambitions of the project are significantly larger than that. “Ethereans” are trying to create a fully decentralised world computer, which can function and remain secure by all members acting in their own economic self-interest. From there, anybody can use that computer as a foundation to create and run new applications.

The ICO (Initial Coin Offering) boom in 2017 was largely only possible due to Ethereum, as the ETH network allows for the easy creation of new digital tokens (if you see a crypto classed as “ERC-20”, you’ll know it was minted through Ethereum). The ICO boom in turn was also responsible for the bull market in Ethereum at the time, for the only way to invest in an ICO that had been minted using Ethereum was to buy the new tokens with ETH.

But that was our last big alt-season – each one is different. Today, instead of an ICO boom that’s occurring, it’s a boom in tokens bearing the promise of decentralised finance, or “DeFi”: the ability to borrow capital or exchange currency in size, at a competitive price, without relying on any centralised intermediary. Imagine having physical possession of share certificates but being able to sell your ownership of them instantaneously over the internet without relying on a bank or broker and you’re on your way to understanding the promise the space holds.

Many of these DeFi tokens which have boomed – such as Uniswap and Aave – run on Ethereum. And if you want to then use those DeFi platforms to exchange tokens or earn yield, it’s easiest to do so with ETH, thus creating more demand for the Ethereum token.

Ethereum gas fees (the cost of making an ETH transaction, which miners earn for securing the payment) have swelled significantly over the past month, a result of significant network traffic: 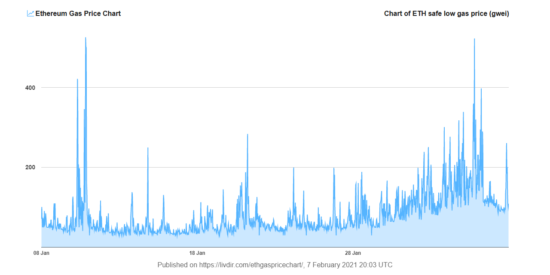 If we think of alt-season being a time when Ethereum and the altcoins it supports come into their own and advance ahead of bitcoin, the Ethereum/bitcoin ratio is a good way of measuring which asset is pulling ahead. And the ratio does appear to have bottomed, which would suggest alt-season is here: 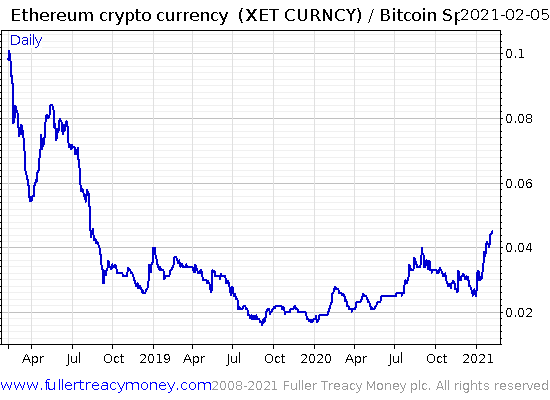 Last year there was something of a mini alt-season. We had the “summer of De-Fi”, when many DeFi tokens boomed, but then were crushed in the autumn. I suspect – if I’m right that alt-season is here – that it will be the De-Fi space that is favoured by the speculators once again.

One should never forget however, that the crypto space is the absolute frontier of investing and speculation – it’s risky as hell, rife with fraudsters, untested technology, and has a seemingly endless ability to both boom and bust.

I’m not even sure if the grand surges and subsequent collapses in crypto should be referred to as bubbles, as they happen so often. After every major crash, the sector just manages to dust itself off and get back to work creating the financial system of cyberspace. And then once progress is made it attracts more interest, generates excitement, and then booms all over again.

It’s hard to even take it seriously. In something of a repeat of the 2017 boom, instead of John McAfee promoting small crypto projects on Twitter, it appears Elon Musk has taken up the baton with his curious promotion of Dogecoin. A cryptocurrency project created as a joke – though which has achieved some great things – now trades at a valuation of $9.62 billion…

How long will this alt-season last? That’s the big question for anyone interested in speculating in the space – and one I’ll be putting to our resident crypto-nut Sam Volkering.

But for now, there’s a party at the market frontier – and it’s worth just watching the fireworks whether you’re involved in the space or not.

PS Market rotations – where specific types of assets are favoured over others – are not unique to crypto of course. And our energy expert James Allen has informed us that exactly such a rotation is about to occur in the renewables space.

While we’ve seen plenty of green stocks skyrocket over the last year, he tells us that the next wave of green stocks to boom are of a different variety entirely. They all follow a specific theme which has gone overlooked during the recent surge, but which is about to become vogue in the renewables narrative… opening up an opportunity for you to get ahead of the “crowd money”.