SOUTHWARK, LONDON – How many times do you reckon the price of bitcoin has doubled over the years?

Bear in mind, bitcoin only began being traded for currency (and not for favours like pizza deliveries) in 2010. And where exactly bitcoin’s price history begins – what its first actual price was – is still somewhat debateable due to the ramshackle nature of early bitcoin exchanges.

My colleague Charlie Morris has studied BTC for years, and he puts bitcoin’s first “real” price at $0.06. While you can find lower recorded prices of less than a cent out there, you’d be hard pressed to buy significant quantities of it at those prices without moving the market.

Using 6 cents as a starting point, BTC has doubled nineteen times – and came within a whisker to hitting to hitting its twentieth last month.

The ability of BTC to compound in this way is nothing short of incredible, but how long can it really continue to double in value like this?

As we finish for the week, I’d like share some of Charlie’s work on this subject. What follows below was written earlier this year, but it remains very relevant – for we remain standing on the edge between the 19th and 20th doubling of BTC…

Any experienced investor knows how satisfying it is to see an investment double. 2020 might have made that seem easy, but I promise you, it isn’t. Microsoft is one of the best-performing stocks of all time, yet it has only doubled 11 times since the initial public offering (IPO) in 1986. Gold has doubled five times since 1968 and is very much looking forward to the 6th at $2,252. Soon I hope.

A big difference between traditional assets and bitcoin is that it came to market at a low price. It didn’t surpass a billion-dollar network value (or “market cap” if you insist) until the spring of 2013, which coincided with its 10th doubling. I show the past doubles and dates below. Notice the lengthy gaps between 8 and 9, 14 and 15, and the latest. 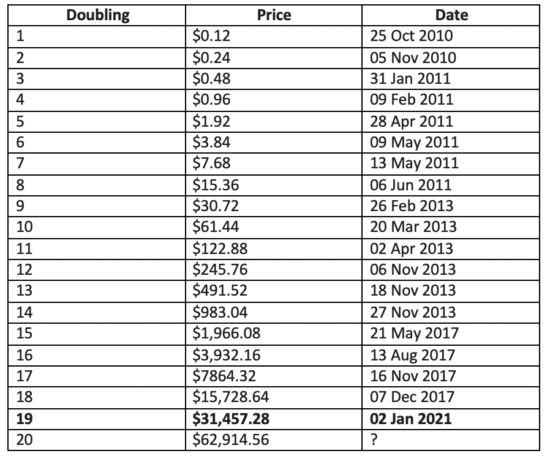 The next double will be the 20th at $62,914.56. This could take weeks, months or years, or dare I say it, might never happen at all. My personal view is months because I am a long-term bull, but as I’ll explain later, the market is a little overcooked and would benefit from a bucket of cold water.

On a log chart, doubles are equidistant (spaced equally), as shown below.

And here with a doubling counter, where I have left room for five more doubles. 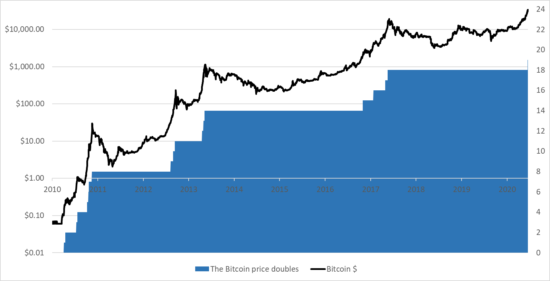 Doubling will get progressively harder because we are talking about real money here. The 20th doubling will have to carry over a trillion dollars of network value. This is becoming serious.

As we enter the new year, macro conditions remain tailwinds. Inflation is rising as seen by buoyant commodity prices, and (somewhat) rising bond yields are even causing the banks to bounce. The real economy is poised to recover in 2021, as soon as the vaccine can be distributed. There is massive pent-up demand for everything, just as there was after the Spanish flu in the 1920s. Overheating is becoming a real risk…

How many more times can bitcoin “roll a double”? One of my colleagues has a very specific number in mind…