Swan song of the bull

Swan song of the bull

Today we pen an ode to easy money and bull markets without regret (or critical thinking). Maybe it’s not worth it to fight the Fed, or to point out how low interest rates have inflated stock and bond prices. Maybe it’s a waste of breath to warn about an inevitable financial collapse that could be years away. I’ll come back to that in a moment.

First, in case you missed it, the Office for National Statistics (ONS) became the latest official organisation to give the all clear on Brexit. “There has been no major sign of a collapse in confidence and, within the data that is available, some indicators of strength,” the ONS concluded earlier this week. ONS Chief Economist Joe Grice said:

As the available information grows, the referendum result appears, so far, not to have had a major effect on the UK economy. So it hasn’t fallen at the first fence but longer-term effects remain to be seen. The index of services published soon and the preliminary estimate of third quarter GDP, published at the end of October will add significantly to the evidence.

The Index of Services survey is next published on Friday, 30 September. But if you take the stock market as your forecaster, you can get a sneak peek. The FTSE 100 closed above 6911 yesterday. The miners drove the gains, mostly on the back of a weaker US dollar. The FTSE 100 is now up just over 10% year-to-date and just over 15% since closing at 5,982 on 27 June.

But when is Brexit? Sceptics, or even the prudent, will correctly point out that the rebound in confidence is all well and good. But if there is another shoe to drop, it won’t drop until after Britain triggers Article 50 of the Lisbon Treaty.

When will that happen?

Early next year, according to Foreign Secretary Boris Johnson. Johnson was in New York at the United Nations, doing Foreign Secretary things. He spoke to SkyNews and said that “By the early part of next year you will see an article 50 letter. We will invoke that, and in that letter I’m sure we will be setting out some parameters, principles, for how we’re going to take this forward.”

Is Johnson trying to put pressure on Prime Minister Theresa May to move things along and push for a “hard Brexit?” The PM’s office walked back Johnson’s comments a few hours later, telling the press that “The decision to trigger article 50 is hers. She will be doing it at a time when she believes it is in the best interest for Britain.”

That seems sensible. The vote to leave has, at least so far, left people wondering about the viability and health of the European project. The UK economy is steaming right along. May must see no reason to rush the decision when everything’s going so well simply by doing nothing. The longer she waits, the more pressure it puts on the EU.

What’s the best time for Britain to trigger Article 50? I’ll think on it over the weekend and get back to you. Feel free to send your thoughts to dan@southbankresearch.com. In the meantime, something will have to give eventually. You can’t ignore the wishes of 17 million people forever, can you?

Now let me get back to the question of whether it’s a waste of time fighting the Fed. Check out the chart below. When the US dollar weakened yesterday, the flip side was a rally in emerging market stocks (along with the miners in the FTSE). It’s all part of the same trade: short the dollar and long emerging markets and things that go up when the dollar goes down. 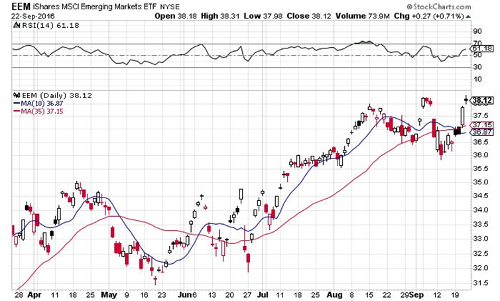 The chart shows the iShares MSCI Emerging Markets exchange traded fund (NYSE:EEM). It’s not a perfect anti-dollar proxy. But it’s not bad, is it? When the market takes the Fed at its word, emerging markets (and EEM) sell off. When the markets realise the Fed doesn’t really mean anything it says, emerging markets (and EEM) rally on the expectation of a weaker dollar for longer.

A word on capitalisation

If you think the Fed is never going to raise rates again – or at least won’t do so until well after the US election – then it’s full steam ahead on EEM and technology. And speaking of technology, did you see that Amazon’s shares closed above $800 in US trading yesterday? The company now has the fourth-largest market capitalisation in the entire world.

Now sit down before you read the following: the five largest US tech companies by market cap are, combined, worth more than all the stocks in the FTSE 100.

That’s a combined market capitalisation of $2.39 trillion. That’s £1.84 trillion at current exchange rates. According to exchange data, the FTSE 100 had a total market value of £1.76 trillion at the end of August. Let’s just call it even and say they’re equal. What does that tell you?

Well, either the market has it right and tech stocks are the best growth bet (and growth is a good bet). Or it’s crazy that five companies could be worth more than the 100 biggest British companies. It’s true that the size of the US stock market and the global preference for dollar denominated stocks is part of the explanation. But when I see a statistic like that, it reminds me a lot of 1999.

The big difference between now and then is these tech stocks have real revenues and real earnings growth. And, if you ask Charlie Morris at The Fleet Street Letter, that growth is reasonably priced right now. So there you go. If you’re confident the Fed is all talk and no action, emerging market ETFs and tech stocks are the go.

Finally, what do you make of the decision by the Bank of Japan to cap ten-year interest rates at zero? That was the sum total of its big policy review, revealed earlier this week. The Bank unveiled what it called a “new framework” for targeting and exceeding (if necessary) 2% inflation in the Japanese economy.

It did not push official rates any further negative. It did not announce an increase in the size or duration of its asset purchase program. It simply committed to keeping ten year rates at zero or below for as long as it takes. But that begs the question, “as long as it takes to do what?”

It’s now clear to everyone that prices don’t want to rise. With technology, demography, and cheap energy, prices want to fall. If the world has massive productive capacity, if people spend less as they get older and have fewer children as they get richer, and if technology tends to drive down the prices of energy and manufactured goods (and the price of labour), then how do you get inflation?

More importantly, why would you want inflation for its own sake? Why not target rising productivity? Productivity gains actually increase total wealth. Targeting GDP or nominal inflation simply increases the quantity and pace of economic activity. It doesn’t do anything for the quality of that activity.

But there’s no point in making the same observation again. The BoJ, like all the world’s central banks, is simply out of ideas. It hopes that time and some unexpected innovation will get things going. And in the meantime, it patches up the holes in the financial markets with wads of cash it can create at no cost. That can’t last forever. And it won’t.