Buy on the sound of cannons drone strikes

Buy on the sound of cannons drone strikes

ABERDEEN, SCOTLAND – I took a wander downtown the other evening. I needed some fresh air, and I was curious to see how the high street is looking like these days.

We’re all pretty used to the sight of desolate shops, restaurants and pubs by now, so the sight that met me wasn’t exactly a surprise. But this time did feel a little different than normal.

Aberdeen is my hometown, and I come back here pretty regularly to check up on family and see old friends. But prior to my return at Christmastime, it’d been quite a while since I was back, and during that period many of the businesses on the high street had changed. As I passed the new storefronts, it was strange to wonder just how many of these new businesses have gone bust already during the lockdowns – and how I’ll likely never know if they were any good.

That said, while the mood in “the silver city” remains very glum, to my eyes things are looking up. After all, this city is the “oil capital of Europe”, and if the oil price keeps up its pace as we’ll explore in today’s note, the good times may well be ahead of it.

I admit that I am somewhat biased here, for I do want my bonny Aberdeen to prosper. Low oil prices post the fracking revolution were brutal for the city, and the oil crash last year, coupled with the lockdowns, was a cruel twist of the knife.

But looking at the oil market now, I’m beginning to think the glory days of $100 oil may be on the horizon…

The rally in crude oil in recent months has flown under the radar for many investors. Green energy stocks have stolen its thunder, blowing the lights out with wildly positive performance (heavily enriching the subscribers of Exponential Energy Fortunes).

But oil, the world’s favourite form of energy has been slowly coming to the boil in the background. Brent crude futures are trading higher now than before lockdowns started anywhere – and the world hasn’t even re-opened yet: 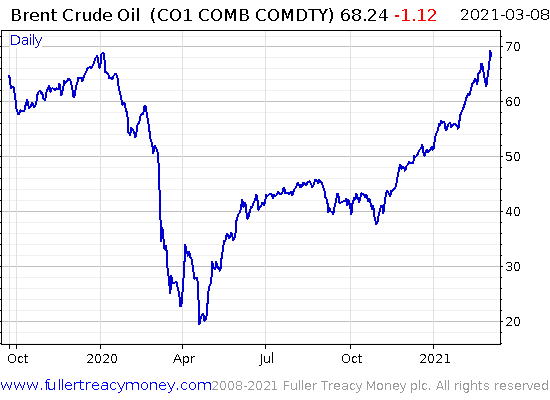 If we cheat a little, the rally looks even more extreme. Brent crude is the international oil benchmark – the US oil benchmark (West Texas Intermediate) had a much worse time of it last year, with WTI futures hitting an incredible -$37 a barrel. If we use that as our starting point, oil is up more than a hundred bucks in less than a year! 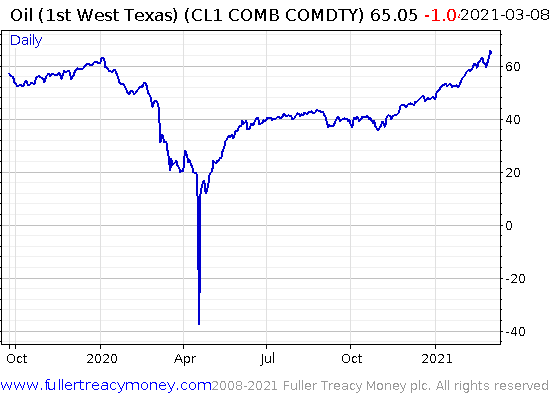 The outlook remains rosy for oil to my eyes. You’ve got the world economy reopening, higher inflation from government spending initiatives, and more chaos in the Middle East threatening oil supply.

The Biden administration has ceased giving Saudi Arabia support for offensive military operations in its war against the Houthis in Yemen. The Houthis, who are backed by Iran, appear to have taken this as encouragement, and stepped up their drone attacks on oil facilities.

I suspect the Iranians would like a higher oil price to ease their economy, which has been beaten bloody with sanctions, inflation, and all the problems WuFlu has to offer.

But at the same time, the US doesn’t mind higher oil prices either. As we wrote last year, the US no longer requires oil prices to be low and stable – a former national need which influenced much of American foreign policy. Instead, thanks to the fracking revolution, the US benefits from higher oil prices and a volatile Middle East (a status like Russia), making peace in the region on American terms less of a priority. And it’d be easier for the Biden administration to push for a Green New Deal on the back of $100 oil prices…

The fracking stocks are finally having a good time of it after getting ploughed for years: 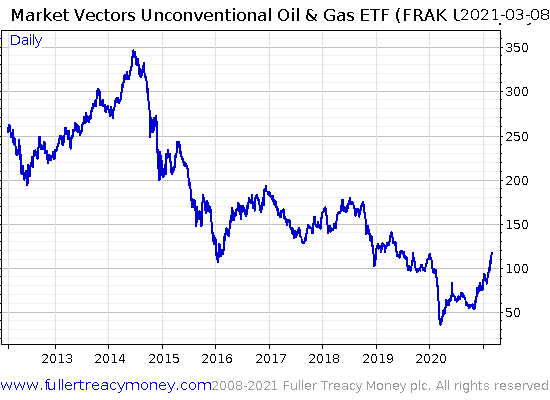 And interestingly, the Saudi Arabian stock exchange, the Tadawul, doesn’t mind the attacks from the Houthis – it’s just listening to the oil price: 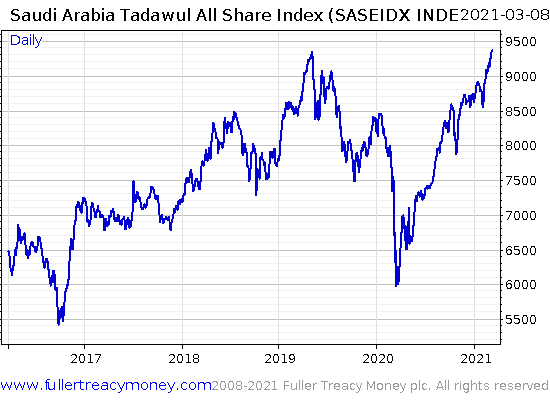 Disruptions to the oil supply chain in the Middle East won’t be going away anytime soon – drone technology has made sure of that. If anything, they’re going to become easier as drone technology advances and proliferates cheaply in the region. This makes the energy trough which our reawakening world is hungry to drink from inherently unstable. And when combined with higher inflation, that’s a potent mix for black gold. $100 oil? I think we’ll see it before year-end…