Did a civil war just begin in the US?

Did a civil war just begin in the US?

There’s no way around it so let’s get straight into it. In today’s letter, we have to deal with what the US Federal Reserve did and said yesterday. Let’s begin with the end in mind and conclude the following: the endgame has begun… but it could be a long time coming.

If you’re looking for a Hollywood-style ending to seven years of debt and failed policy, you may get it. But it will be from a financial accident/calamity that almost no one sees coming until it’s too late. If the Fed has anything to say about it, interest rates will remain low for a long time – in which case, stock and bond prices might stay high a while longer.

Speaking of stock and bond prices, the S&P 500 was up just over 1% on the Fed’s decision to stand pat. Commodities were up. Bond yields in New Zealand and Australia fell (and prices rose). And the US dollar was down across the board, with gold up over five dollars to $1,332/ounce. But let’s look closer at the Fed and the US dollar… and the prospect of a civil war in US monetary policy.

The Capitol vs the Districts

Is the Fed becoming a parody of The Hunger Games? There are 13 “districts” in The Hunger Games. And of course, all of them are dominated by the Capitol – where all the elites, central planners, and decision makers live and prosper. Where’s the parallel?

Well, the Federal Reserve System is divided into 12 regions. The Federal Open Market Committee (FOMC), the group that sets target US interest rates, is made up of 12 voting members. Seven are members of the Fed’s board in Washington (the Capitol). The president of the New York Fed is a permanent voting member, because Wall Street banks essentially own the Fed. And then three votes are rotated among the regional Fed presidents. 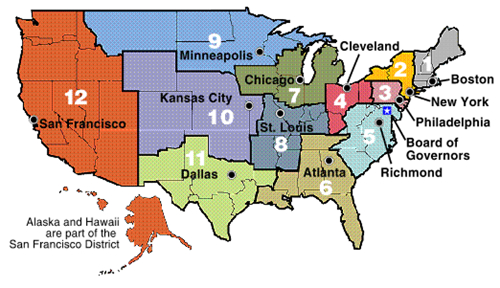 You had two Midwestern Fed presidents voting for a rate hike, and then Boston. The rest of the voting members are in Janet Yellen’s camp. But it’s an interesting divided and one worth studying. Yellen disavowed any political motive in keeping rates low before the US election. But do you think it’s possible there’s dissension in the banking ranks at the Fed? That the interests of the Capitol and the Districts are beginning to diverge?

If it’s just a difference over when and how quickly US interest rates should be hiked, it’s a non-story. But if it’s the beginning of a deeper division over the effectiveness of monetary policy itself, it’s well worth watching. What’s good for the bankers in New York and the politicians in the Capitol may not be good for the rest of the Districts.

And please do keep in mind the US is due a recession and just might get it. The U-6 rate – the broadest measure of US unemployment which includes those who’ve dropped out of the official workforce because they can’t find jobs – was 9.7% in August (nearly twice the “official” rate of 4.9%).

Decline and fall of a world reserve currency

The Fed said the US economy is balanced between two outcomes, growth on one hand and inflation below the target rate on the other hand. It hopes that employment will tick up between now and December. It expects to raise US rates two times in the next 12 months. That’s down from three times, mentioned at the last meeting.

But what would the chart above say, if it had autonomous intelligence and could speak? It might say that since the mid-1970s, there’s been a recession almost every eight years in America (the grey column on the chart). The exceptional period was between the early 1990s and the early 2000s, when low rates and the dot.com boom prevailed.

The chart might also confess that the long-term decline of the US dollar – its terminal decline as the world’s reserve currency – began in 1985 with the Plaza Accord. The admission of China to the World Trade Organisation (WTO) in December of 2001 marked a high in a dollar rally that began in 1995.

And now? The Bernanke Fed ignited a dollar rally – and a rally in dollar-denominated financial asset prices – in 2003 when the era of QE began. The chart, in its quiet moments of anxiety, whispers that the next stage of decline in the greenback will be accompanied by a loss of confidence. And then a recession, a falling dollar (rising gold price), and (perhaps) the dreaded Sovereign Debt Depression.

For now, the Fed (and central banks in general) retains the illusion of authority over the economic cycle. That’s a big fat myth, of course. The Bank of Japan is Exhibit A in the case against a central bank’s ability to create growth. But the BoJ’s policy history (and future) also provides evidence of how long a central bank can prevent an inevitable crisis if it really wants to. More on that tomorrow.