American markets were down again overnight. But only marginally so.

The few stocks that led the market up are now taking it back down again. A series of scandals are behind their drops. But how can a select few companies move the market so much?

Because they became so big during their meteoric rise, their weight in the indices has a lot of clout when it comes to moving the market down.

The FAANG stocks rose about 40% in the last year to make up about a quarter of the Nasdaq index, valued at about $3 trillion. Amazon accounts for over a quarter of the S&P 500’s gain for 2018. Throw in Microsoft and Netflix and you have half of all gains.

Having a select few stocks drive the index reveals how flimsy the gains are. And that becomes even more obvious on the way down. It only takes big drops in those key stocks and the whole index looks in trouble.

Amazon shares are down over 10% in two days – wiping about $13 billion off Jeff Bezos’ wealth. Until yesterday, it was Facebook that had plunged most, for reasons you can’t avoid reading about elsewhere. Netflix wasn’t far behind thanks to a “delete Netflix” campaign.

Facebook, Amazon, Apple, Netflix and Google’s Alphabet aren’t the only ones caught up.

NVIDIA plunged after driverless car testing proved a debacle and was stopped.

Tesla’s stocks and bonds are tumbling. There’s even talk of a default. Tesla’s bonds are priced as riskier than Ukraine’s, yielding over 7.5%. John Thompson from Vilas Capital Management reckons Elon Musk needs to “pull a rabbit out of his hat” or the company could be bankrupt within four months.

What’s going on? Perhaps it’s profit-taking in anticipation of troubled times. We’re due for a recession, crisis or bear market in the US. Assuming they can still happen in a world of quantitative easing (QE).

I’m not so sure the governments and central bankers of the world can afford to let any of the three happen any more. With an infinite QE budget, why not prevent markets from falling? But that’s another story.

What you’ll notice about the likes of FAANG is that they’re tech stocks of a kind. And they’re still fairly young in many ways.

Investors seem to forget that being in the tech and innovation sector is hardly in the large established company’s favour. A huge proportion of the FTSE 100’s telecom companies have disappeared from the FTSE 100 since their boom in 2000. 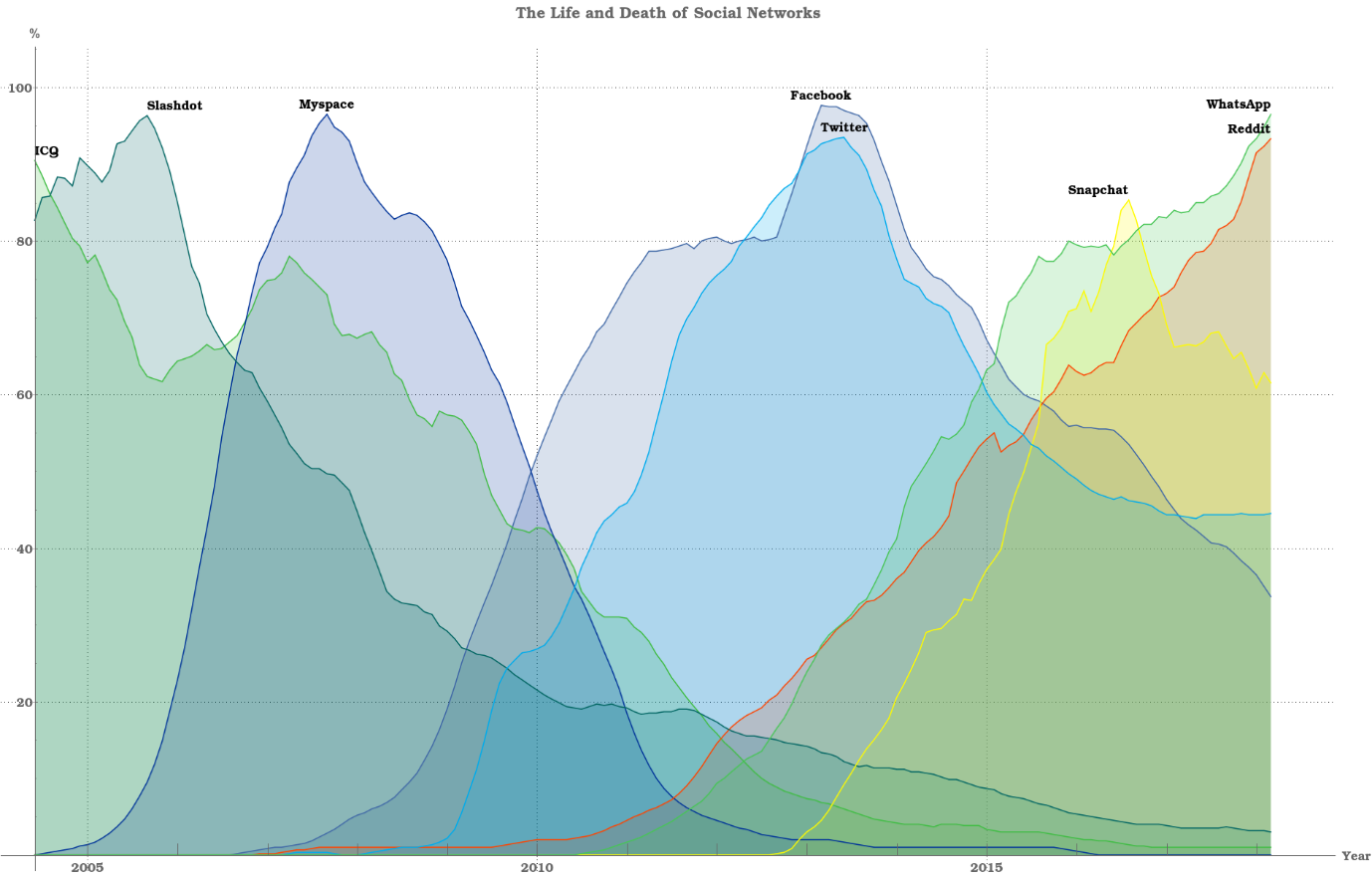 If you’re wondering what on earth the Y-axis refers to, you’re not the only one. Apparently, it’s related to search interest for that social network’s name on Google. Obscure, but the idea remains.

The chart shows the short life of a social media network. They might make Pokémon cards and Beanie Babies look good, but we’re talking about massive corporations with billions of dollars invested in them.

The point I’m trying to highlight is that the rise and fall of the key companies on our markets is accelerating. It happens over a shorter period of time.

That rise and fall is a natural part of capitalism. Where will oil companies be in 50 years’ time?

But if this process accelerates, that poses an immense problem for investors. Buy and hold won’t work over the course of an investor’s lifetime any longer.

The index will look nice and healthy as new entrants butt in and drive it up, but actual stock performance will be poor unless you’re stock-picking and selling out as each stock peaks. If you didn’t own at least one of the FAANGs, you’d probably be underperforming the index badly.

If investing becomes about speculating on the next fad, are financial markets a healthy place to save and grow wealth in?

We’ve been looking into the risk of an American recession for a few weeks now. Today, an important update made the news.

The US economy grew 2.88% in the fourth quarter of 2017, faster than anticipated. Growth for the year was 2.3%, but the latter three quarters saw growth around 3% on average.

In other words, a recession looks further away. But the future doesn’t look so rosy. The US’ yield curve continued to flatten the last few days. And remember, every American recession in the last 60 years was predicted by an inverted yield curve, which only sent a false signal once.

Any lower on the yield curve and the tumbling stockmarket will make plenty of sense.

A critical stock market indicator has just reached a point that’s only been seen twice before in history.
The first time was the Wall Street Crash of 1929…
The second was the dotcom bubble in 2000.
Both times saw British stocks halve in value.
Tim Price explains what you need to do with your money.
Capital at risk. A regulated product issued by Southbank Investment Research Ltd.