America’s lost decade is over

America’s lost decade is over

This Capital & Conflict will attempt to persuade you that America is a poor, bankrupt nation without hope or promise. And you should do something about it.

I’m still trying to persuade myself, because what I’ve found is rather shocking to me. I thought America had a half-decent economic recovery…

The implications of having an economic basket case as a global superpower are a bit of a worry. Especially when that superpower is our key ally.

Not only that, but America’s importance to financial markets is as immense as the UK’s reliance on those markets. The US is a huge source of capital to the world… which can be withdrawn suddenly, triggering a financial crisis. And the dollar is the reserve currency. Any instability affects every single asset price in the world.

Most of all, a recession in the US would devastate the global recovery before many countries have their budgets under control and their interest rates at levels they can cut from. It’s no secret who’d crash first in that scenario…

So let’s dig in. But this time, it’s not abstract national economic figures we’re looking at. Nor government debt or stockmarket performance. We’re focusing on the man on the street. And we’re using the Federal Reserve’s own embarrassing figures, which put on display its own impressive policy failure.

This chart shows you the change in Americans’ median net worth since 2007. In 2016, wealth still hadn’t recovered. 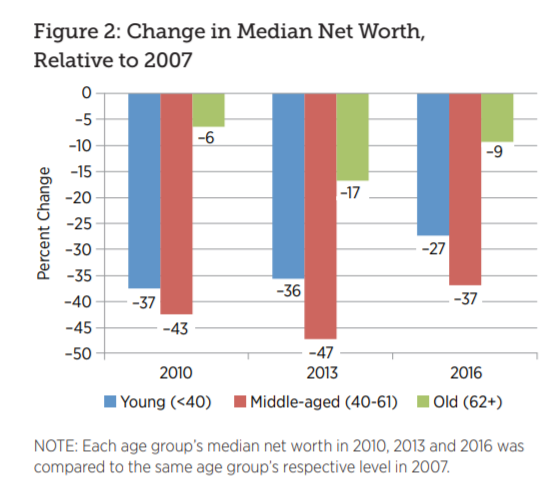 Incomes for young people still hadn’t recovered nine years after the crisis either: 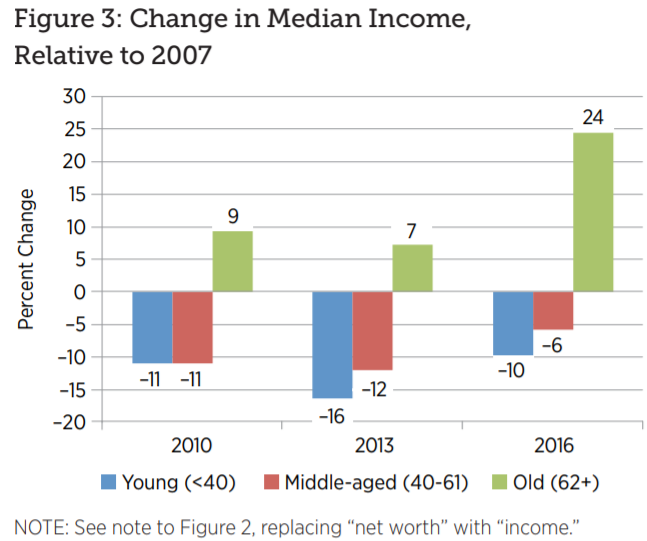 Let’s focus on which age cohorts were really hurt by the financial crisis. It was the young and middle aged. The old are doing well by comparison.

Another chart shows how families have performed since 1989. The younger you are, the further behind you fall. Only those over 65 have recovered financially.

The Fed also had a go at comparing where families “should be” in terms of wealth accumulation with where they actually are. As the St Louis Fed researchers put it, “typical families headed by someone born in the 1960s, 1970s and 1980s were significantly below their wealth benchmark levels in 2016—by about 11, 18 and 34 percent, respectively.”

The later they were born, the worse it is. And “the typical 1980s family actually lost ground in relative terms between 2010 and 2016, a period of rapidly rising asset values that buoyed the wealth of all older cohorts.”

The young are losing wealth in America’s economic recovery…

The devil is in the details

The Fed also released its annual “Report on the Well-Being of U.S. Households”. Some of the facts and figures are mindboggling.

One quarter of adults aged between 25 and 29 live with their parents. And more than one in ten of those in their 30s.

More than 40% of adults in their late 20s provide financial assistance to their parents.

41% of adults couldn’t afford a $400 surprise expense out of savings alone.

22% of adults expected to miss paying a bill in the month the survey was conducted.

Other figures from the US economy are just as concerning. Credit card delinquencies are up over 20% in five years. The total balance of student debt is more than 1.5 times credit card debt.

PeerIQ reports that Americans are more likely to pay off their mobile phone bill than their car loans for the first time. The result? “By the numbers, subprime delinquency for loans more than 60 days past due reached its highest since 1996 at 5.8 percent. By comparison, the default rate during the 2008 financial crisis was around 5 percent,” reports pymnts.com.

What about Americans’ key asset – their home?

The New York Fed released its report on “Home Prices, Housing Wealth and Home Equity Extraction”. Mortgage debt is still below its 2008 peak. But house prices are at a new high.

Sounds good. Except for the divide it has created between homeowners and renters. The homeownership rate has fallen from 69% to 64%. But this masks the distributional change. Again, young people are the ones who have missed out. 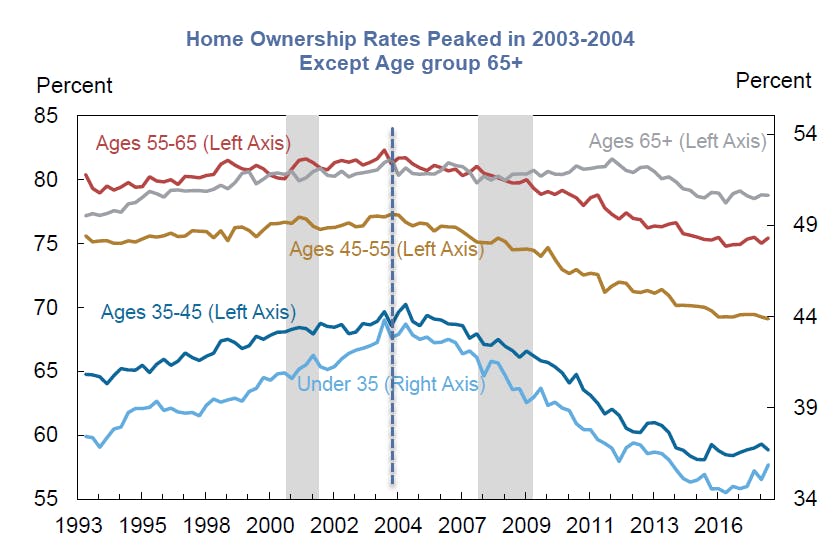 Put the gains in house prices and the changing age of ownership rates together and you get this: between 2006 and 2017, the over 60s increased their share of the housing wealth pie from 24% to 41%. Those under 45 have gone from owning 24% of the US’ housing wealth to just 14%!

For those Americans hoping for an inheritance, there’s some bad news. Over 60s more than doubled their share of borrowers since 2006. They’re cashing out of their home wealth without selling. Young Americans are going to inherit a mortgage.

Remember, all this is after a record-long economic recovery, with low unemployment and a boom in asset prices…

How much better and worse could it get?

When they don’t listen, you have to act

How do your own compare? And those of your family?

Do you try to do the right thing for your family… and yet receive no thanks?

Everyone at home thinks they know better than those who actually bring in the money.

Fact is, you know something your family doesn’t…

There WILL be another financial crash.

The question is WHEN.

Today, I have an answer for you. The crash has already begun.

Every family in Britain needs to prepare for what could be the biggest financial crisis we’ve ever faced.

Your family may exasperate you now, but one day, they will thank you. Probably when statistics like those above are published about Britain.

Here’s everything you need to know.